skip to main | skip to sidebar

It looks like I will be moving again in the near future and don't have a good place to store my miniatures.  Seeing as how I haven't had a lot of time for war games over the past few years I think it is time to search for a new home for my fleets.  If any one is interested in buying any of the miniatures featured on this blog please leave a response in the comments and we can try to work something out.
Posted by Smith at 2:40 PM 3 comments: 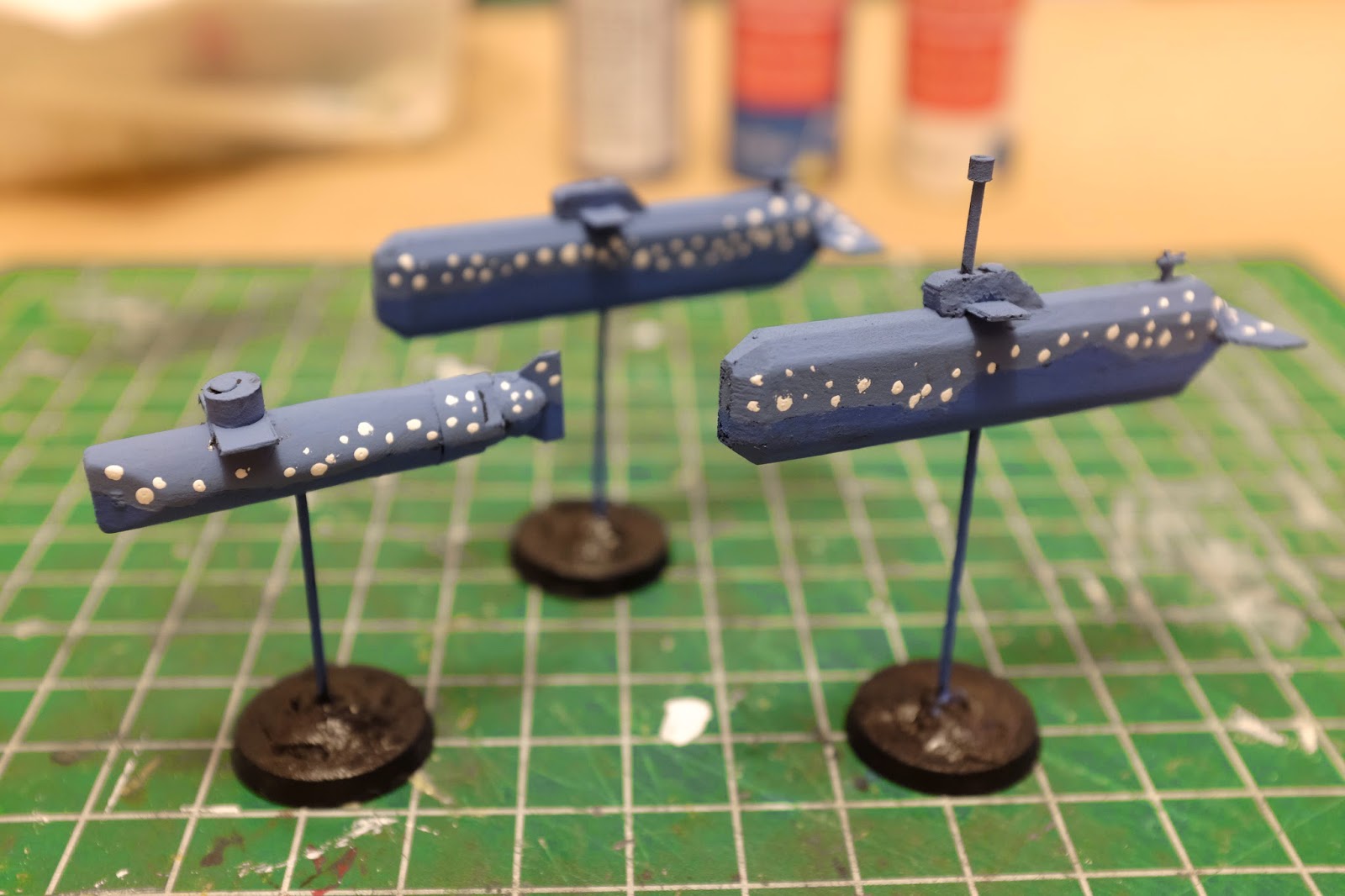 I completed my first Aquanef squad consisting of two large submarines and one midsized sub.  I made an attempt at an underwater camouflage pattern by painting the upper hull light blue and the under side a darker blue.  In between the two layers is a burst of bubbles.  I haven't decided on a nationality for the fleet yet but am leaning toward British.
Posted by Smith at 2:45 PM 2 comments:

The Votes are In!

Well there wasn't much of a conscience reached with the pole, but since I voted for Aquanef I will be going in that direction.  I have a few craft I have already been working on and will post the results soon.  So keep an eye out!
Posted by Smith at 8:09 PM No comments:

I don't post many battle reports but for the centennial of the battle of Coronel I knew I had to do a little something.  So I created a mini campaign around the battle altering standard rules just a little.  To keep things even both squads stars with 2 armored and one light cruiser.  Support was dependent on a separate skirmish I called "race for the relay"  a short ship on ship scenario that only lasts 8 turns.  The premise was which ever side can reach and hold the relay for three turns gets to call for aid.  Since the Germans won their 2 light cruisers on patrol in the area rush to the aid of the main force.  had the British won, the battleship Canopus would have arrived to assist their force.  The first skirmish "race for the relay" took place yesterday and will give their side a definitive advantage.
Since the real world British force was made largely of reservists I had a novice Aeronef player command their force.

Now to get to the battle!  Both sides face off starting with even forces the German reinforcements arrive 3rd turn. 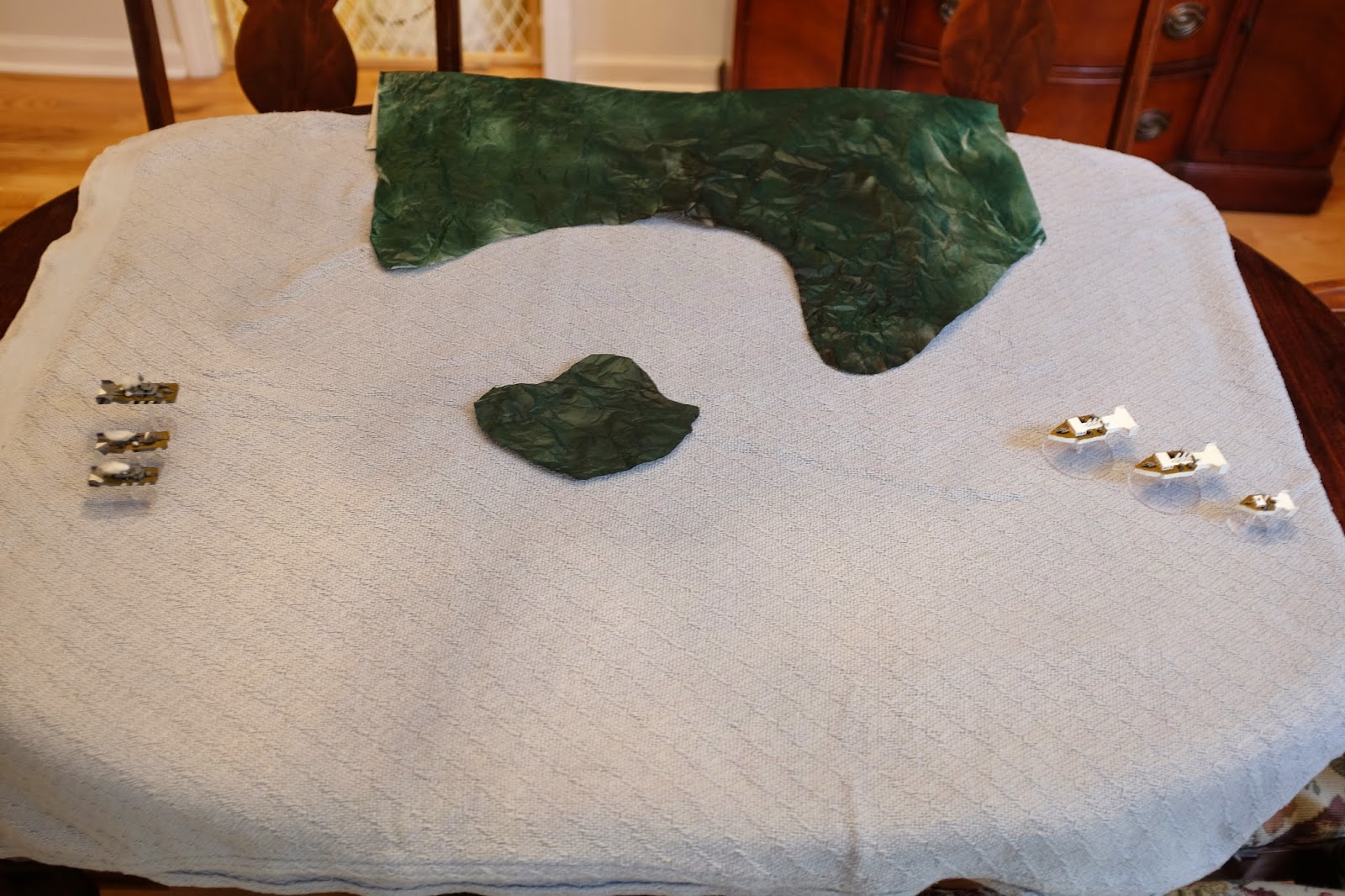 Not too much happens in the first few turns as the fleets close in and Glasgow opens fire on the Germans with little effect. 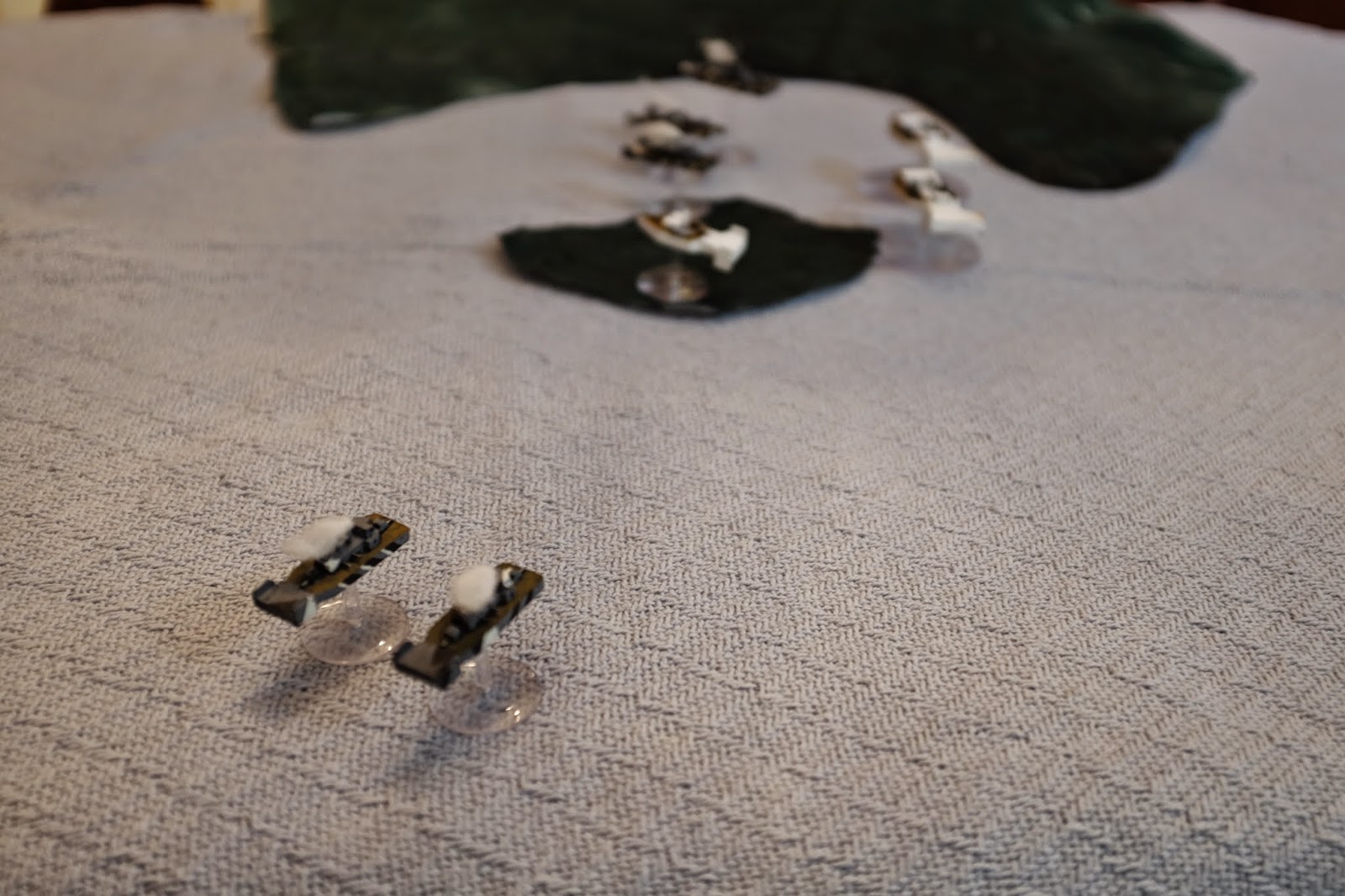 Nurnberg and Leipzig arrive and race to aid their sister ship Armored cruisers from both sides exchange light fire with little effect, but the British seem to be preparing for a broadside. Glasgow goes down.  Had the player been more experienced he may have allowed Glasgow to flee for a victory point, but instead fought on dealing some damage to all three of the German light cruisers.  Armored cruisers exchange broadsides dishing out damage. 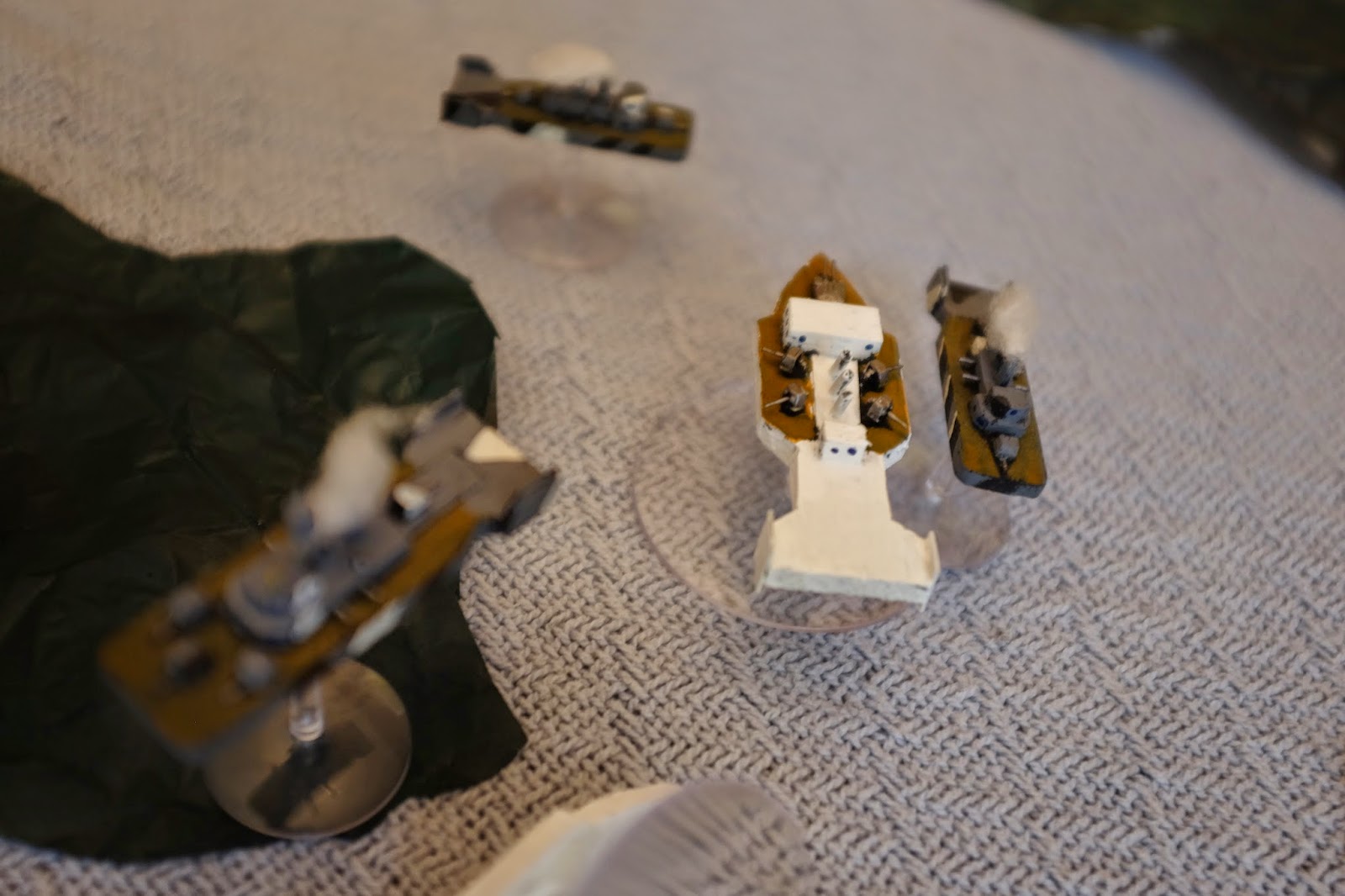 Goodhope goes down nearly taking Genisenau with it!  Mammoth Strikes her colors and is promptly boarded and captured! One of the rule mods I made was for ships who don't pass morale tests to immediately "strike their colors" and stop doing much of anything.  The battle was a resounding victory for the German Empire who earned every possible victory point and capturing a British cruiser in only 12 turns.  The results were almost too good to be true, very much like the real world battle.  This scenario was great and not as one sided as it may look, I will do it again soon, but might change up a few of the rules to give the Brits a more victory points like limiting the turn number or providing them an additional ship like Otranto.  Perhaps in another year or two I will have it all hammered out. 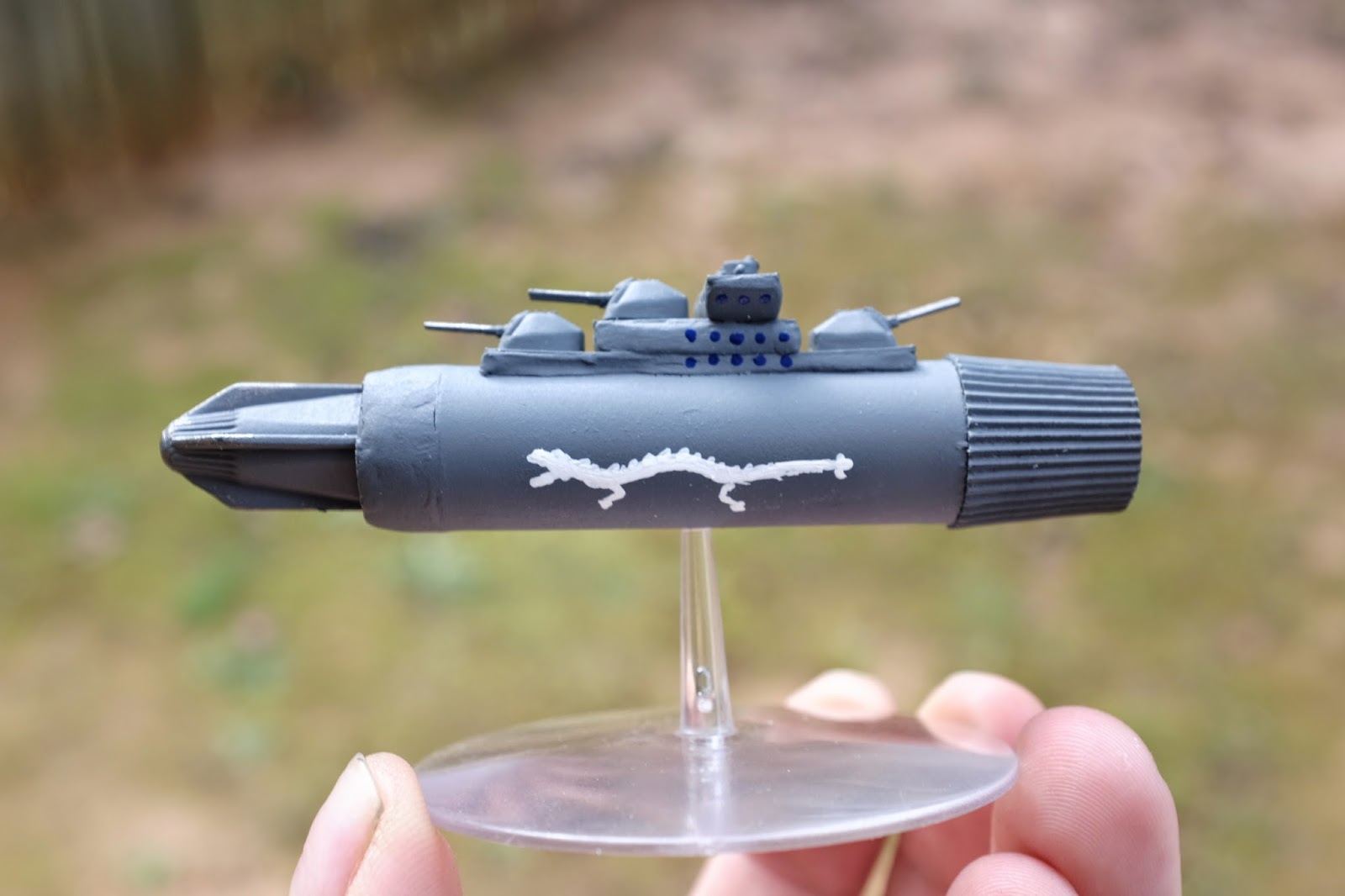 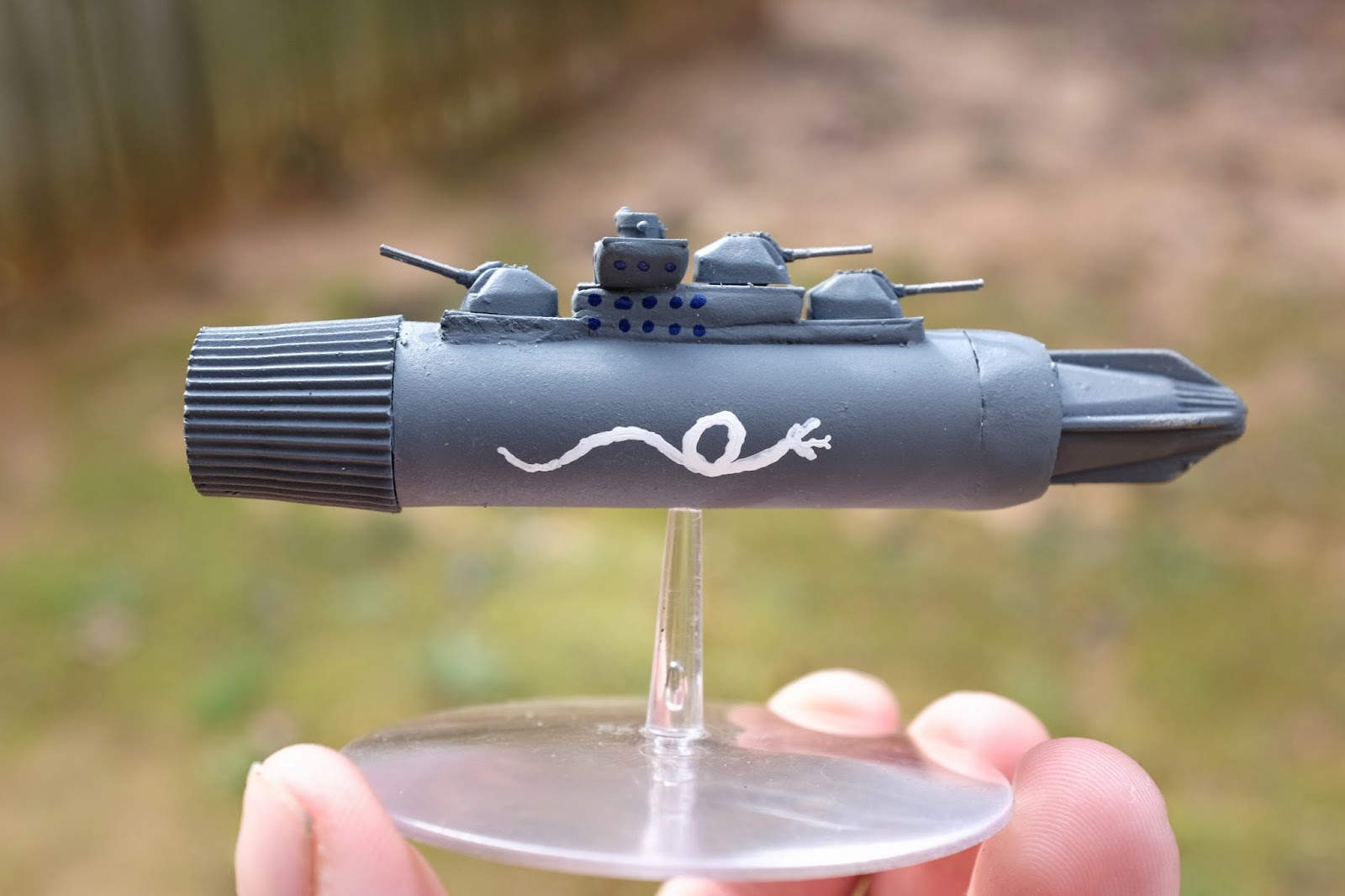 I finally finished off the anarchistic battleship I've had sitting around for a few months now!  The carrier will be up soon as a flag ship for the Italian fixed wing fleet.  The battleship  (fast battleship to be more precise) is a flat grey with a large python logo starboard side and and an asian style dragon port side.  the design is based on a Albatros flown on the eastern front by Bohme/Lademacher of Kasta 10 during the Summer of 1916. You can find more in the aircraft at the following link: http://www.wwi-models.org/Images/Pearson/art/index.html

My back story for this ships is that it is an advanced airship that was built and maintained by a band of rouge scientists and is one of the most advanced ships in skies, crewed by rouge soldiers with the intent of halting piracy and imperial abuse of colonial states,very Nemo inspired if you hadn't guessed.  Despite it's dirigible look it in fact a well armored aeronef with a large bow ram, lots of guns, and speed and agility like on other ship of it's class.  It also has the ability to carry 2 fighter flights on board.  The ship will usually be fielded alone with only fighters for support and possibly the two large sea planes from older posts.
Posted by Smith at 12:09 PM 1 comment:

Over the past few years I have built up quite the collection of Aeronef Ships and terrain pieces.  Yet somehow I have not extended my exploits beyond the skies.  So I have added a pole that will be up for the next month to give my followers the chance to vote on what I should do next.

Please vote and feel free to leave comments and more specific suggestions.  And Keep your eyes peeled I will be revealing the battle ready Italian fixed wing fleet soon as well as more British war ships in the not too distant future.
Posted by Smith at 11:43 AM No comments:

Smith
Yokosuka Naval Base, Japan, United States
I am a man of few words who enjoys miniature games history and anime just dont tell my Shipmates.